In this article, we will see how to write a python program to check Leap Year. A year is said to be a leap year if it’s completely divided by 4. In other words, leap year always gives a reminder of zero after dividing by four. But these conditions are not satisfied for the century years.
Century Years: Century years that end with 00 like 1600, 1700, 1800, 1900, 2000, etc.

A century year is a leap year if it is completely divisibly by 400. You should have a basic knowledge of Python Operators.

So, our problem to check whether a year is a leap year or not is solved into three parts:

Note: A century year is always divided by 100 whereas a normal year doesn’t divide by 100.

Java Program to Convert Milliseconds to Minutes and Seconds 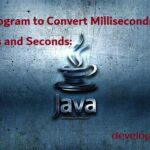