Network Operating System is a branch of computer science to understand the connectivity between devices and network exchange. It is designed mainly to support workstations, personal computers, and sometimes, older terminals that are connected on a Local Area Network, commonly known as LAN. The Network Operating System allows multiple devices within a network to communicate and share resources because of its software that allows NOS to do so.

The main role of NOS is to provide basic network services and services that can support more than one input request simultaneously in a multi-user environment. Some of the hardware that is used as NOS includes more than one personal computer, a printer, a server, and a file server with the local network that connects all of them.

The features of a network operating system are related to administration, system maintenance, and resource management functionality. Such as-

Nowadays, operating systems are conceptually upside-down. It has been developed the hard way and gradually struggles upwards from the machinery. Such as processors, memory, disks, and displays towards the users. In the coming future, we can see that operating systems and information management tools will rapidly grow. It has features that can make your life simple and unify life online. Most of the users’ documents are distributed over many computers by the operating systems. So if you own a PDA, internet-enabled cell phone, or other digital gadgets. So then you have more boxes to lose things in. The approaching operating system and info management revolution is itself speculation. It is growing day by day to make our life easier. 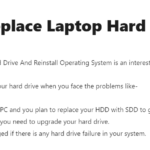 How to Replace Laptop Hard Drive